I can not possibly bring myself to apologise enough for the lack of news from me in the last few months. Fear not though, I am doing quite well, although *it* has seemingly gone from one farcial episode to the next. I shudder to think what would have happened if had not been here to look after it..

But anyways, i should pickup the tale where it was left off. 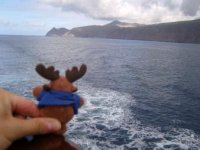 As we sailed off from this wonderful, if strange and non elk-accessible island of St. Helena, I wondered again exactly what it had in mind. But looking back at the slowly disappearing headlands, i sadly wondered if I would ever be able to return. 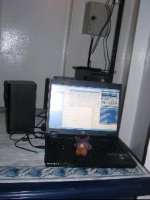 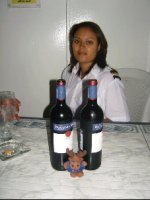 The journey was surprisingly rough to begin with, and many of these humans disappeared from view for some time to be do things which are very un-elk like. Slightly surprisingly, my stupid human was not amongst them. Towards the end though, the fun started to kick off: Late night partying which – obviously – only took off after i had taken control of the DJ'ing, and of course, stolen enough wine from the ships crew 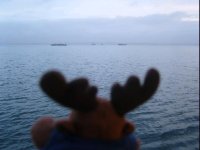 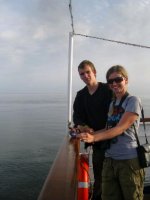 Many hours later, with virtually all the Stupid Human's still asleep or drunk, daylight broke and we started the slow meander into the harbour at Walvisbaai, and I had the chance to say goodbye to some new Human friends. I admit to being a little apprehensive. After all, I am a good solid Scandinavian elk, and this is Africa, full of strange animals that i have never before met. And whilst I know I am the paragon of friendliness – I am traveling with a stupid Human after all – I have no idea how some of the animals will react to the sudden appearance of an Elk. I hope they are nice to me. 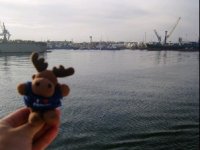 And just like that, we had arrived in the harbour. And my short holiday was over. Now it is back to the duties passed on through my family, and I have again to attempt to look after my dratted stupid human. Such joy, isn't it, my dear friends?

And with that, i was one of the very first Elk in Africa.

Nice and settled. So why are we leaving again?

So, dear friends, the S.H. comes to me last week and says “Clive, you know, it is almost time to leave again”. “What?!” says I, “Why are you leaving this wonderful place. And where are we going next?”. Then it says “You don't have to come with me if you don't want to, Clive”. And THAT comment stunned me. After all, it knows that i have promised my dear mother to look after it, and how can i do so if i don't go with it?

And so it seems that I will leaving soon and my time here apparently runs short, so i suppose i should update you on what I have been doing. I have been clambering over more rocks than is possibly good for an Elk's delicate hooves, but the scenery has always been stunning. 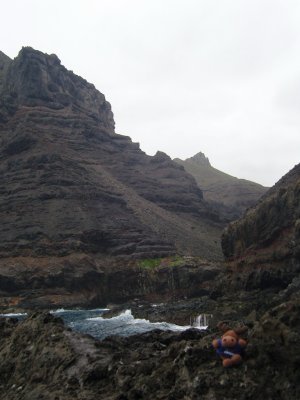 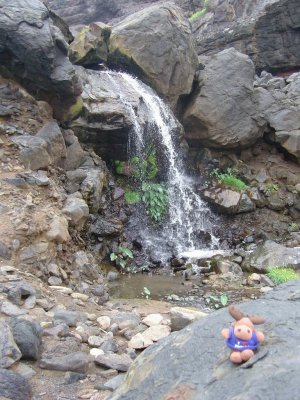 And there are waterfalls everywhere. 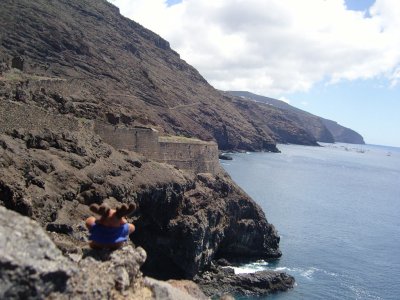 There are also fortifications everywhere. 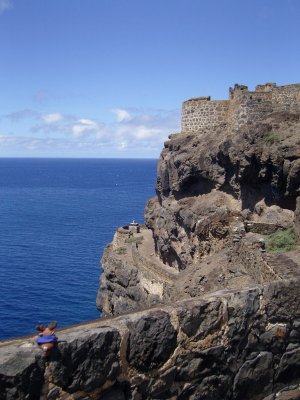 And the sea is just so pretty. I am so happy that the S.H. is letting me explore alone! 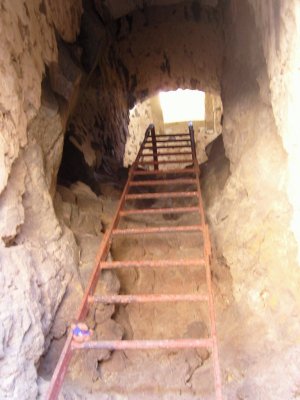 I even found some long forgotten secret passages in the mountains. 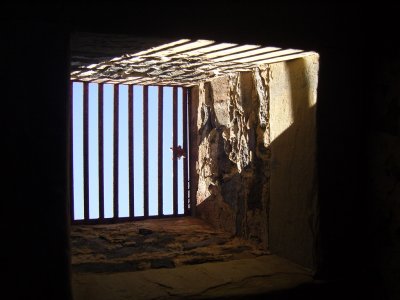 ...Though there is a long story behind my short term incarceration that perhaps we won't go into that here. Suffice to say that it – *IT* – dropped me in it badly. Damned Stupid Human. 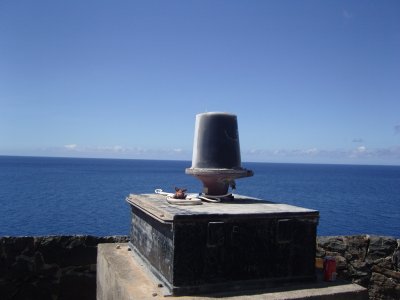 And as to their excuse for a lighthouse... 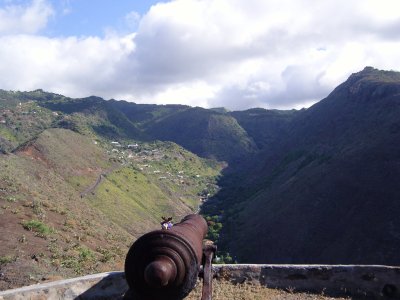 It truly is a stunning place, and I have to say that I am happy to have come.

But the S.H. still won't tell me where we are going next. Any idea, dear friends?

I am not amused

So. One day I have kicked out the stupid human and am doing some work, when i started to browse through it's photo collection, and discovered this abomination. 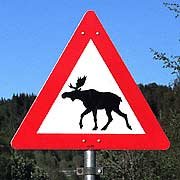 Why on Earth would anybody want to be wary of us wonderful creatures? And perhaps more to the point, why did *it* not show this to me before? If it had just a milligram of intelligence, I would assume it was hiding something from me. But it doesn't. So what on earth is it's game...?

Either way, I am not amused.

So, I thought, now i have been marooned on this rock with no chance of living the high life or escaping the S.H., I suppose I should have a look around. 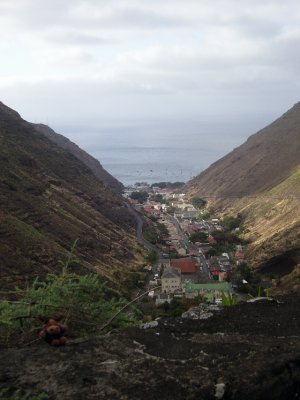 On reflection, i thought, actually, it's not a bad place. the S.H. is to be commended: This is, after all, the same S.H that has ended up spending large amounts of time in Aylesbury and Hässleholm, so it's judgement is, generally, laughable. 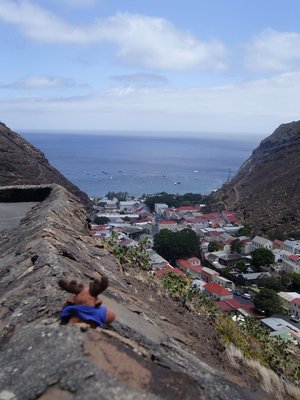 One thing i couldn't help notice, though, is how hilly everywhere is. No problem for an Elk such as myself, but you just now that *it* will complain. And if the hills don't get it.... 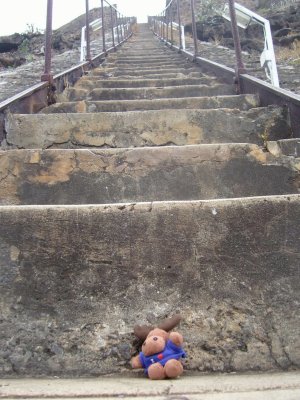 ... it is bound to complain about the amount of stairs here. 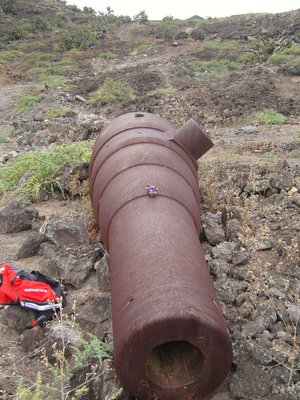 It also seems to have been a place of occasional dispute, judging by the artillery left around. I always get slightly worried when I see such things knowing it's ability to end up in such places... 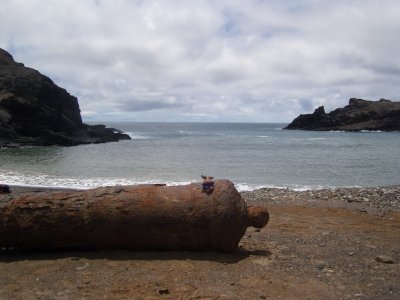 But despite that, it is definitely a pretty little place. 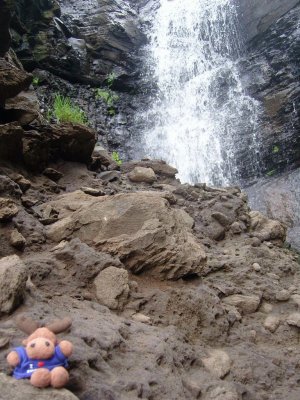 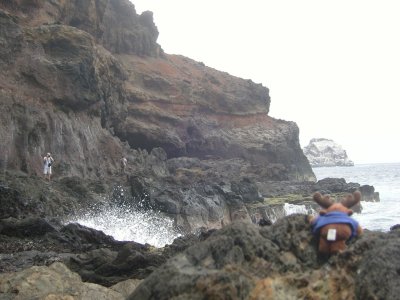 Getting to my new home

Luckily, i thinks, we've only another 3 days to go. But I must admit, i'm getting to enjoy this ship lark. 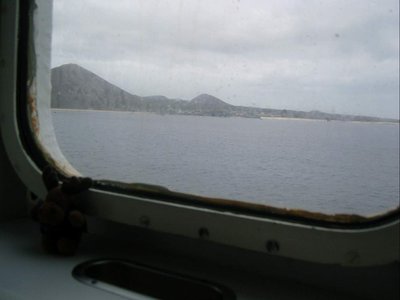 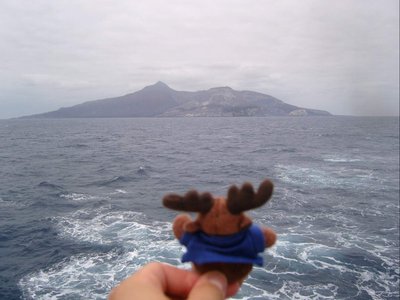 I watched as Ascension Island disappeared into the background, and then, only a couple of days later – and without any interference from *IT* at all – my new home slowly appeared: 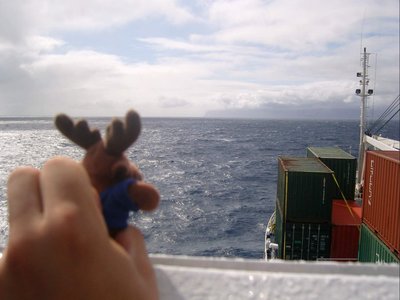 .. from under this thick layer of cloud? I thought, slightly indignant and smothered in sun cream, that this was supposed to a tropical island in summer? So what's with all the rain and cloud?! I think that damned S.H. has been lying to me again. 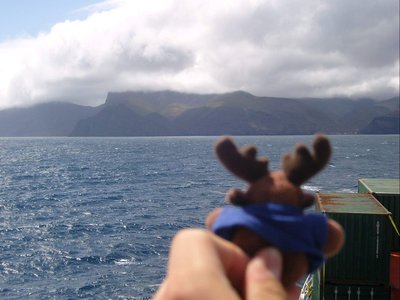 Still, at least with all this waiting around and all these stupid humans so excited, i had time to have a last chat with the lovely Emily. Damned it, those are pretty ears... 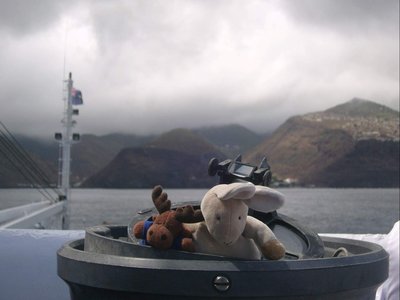 So now i'm at my new home, and the stupid human keeps meeting people, and it doesn't really know what is going on. Me thinks i'll have to look after it. Again.